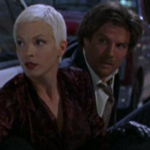 After five seasons of Highlander: The Series, Adrian Paul started to worry he was gonna have to play the fuckin Highlander forever. And he had dreams. He wanted to do movies and stuff, whether or not producer William Panzer considered that “somewhat delusional” (as he says on a DVD extra). Though Paul indeed appeared in John Landis’ SUSAN’S PLAN and a thriller called CONVERGENCE, it was preparations for his first appearance in a theatrical Highlander movie that really screwed with his TV filming schedule.

So rather than the 22-episodes of seasons 1-4 or the 18 of season 5, the sixth and final season of Highlander: The Series was lowered to 13 episodes, two of which Paul didn’t even appear in. But the producers were planning a spin-off about a female Immortal, and they decided to use the season as “a giant screen test” to find their new star. END_OF_DOCUMENT_TOKEN_TO_BE_REPLACED