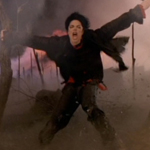 Had things gone differently, Michael Jackson would’ve turned 60 today. Every year on his birthday I like to write about one of his videos. This year I chose “Earth Song” because it seems like we need it – it sadly seems more and more relevant as time goes on – and because I think it’s one of his lesser known videos.

At least it was to me. It was the third single from the 1995 album HIStory: Past, Present and Future, Book I, which I didn’t actually buy when it first came out. I don’t know if it was wherever I was in life or the fact that it was half greatest hits, but I didn’t pay as much attention to that album as I had some of the other ones. I did really enjoy the weird promo they were showing on BET and MTV, where Michael leads a scary army and a giant statue of him is forged and unveiled to a crowd of screaming fans. And at the time I thought those were Rambo-style bullet straps on the statue. I still don’t know what the fuck he was trying to communicate with that short film, and also I still enjoy the audacity of it.