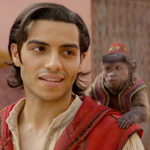 That fucking sucks. On the other hand, I can recognize that most of these movies are pretty enjoyable on their own merits. So I try to be fair. END_OF_DOCUMENT_TOKEN_TO_BE_REPLACED