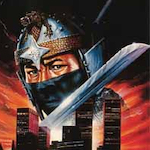 It’s not surprising to see that director Gordon Hessler (KISS MEETS THE PHANTOM OF THE PARK) did a bunch of TV shows like Wonder Woman and CHiPs, because that’s kind of what this feels like. His martial arts bonafides include episodes of Kung Fu and The Master. He later did another one with Kosugi, RAGE OF HONOR. What does make this one kind of interesting is that it’s written by James Booth, an English stage and screen actor who was in ZULU, DARKER THAN AMBER and CABOBLANCO. He was once such hot shit that he turned down the title role in ALFIE, but when things slowed down for him he tried out screenwriting, starting with the Charles Grodin movie SUNBURN (1979) and the Gil Gerard TV movie STORMIN’ HOME (1985). END_OF_DOCUMENT_TOKEN_TO_BE_REPLACED