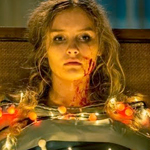 It mostly stars the youths. There’s the kid that played Peter Pan in PAN (Levi Miller) and the two kids from THE VISIT (Olivia DeJonge and Ed Oxenbould). There are other characters, like Patrick Warburton (THE WOMAN CHASER) and Virginia Madsen (CANDYMAN) as the parents of Miller’s character, but much of the movie is just between those three kids. END_OF_DOCUMENT_TOKEN_TO_BE_REPLACED