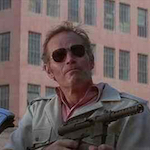 So during daylight he’s alone in the city, at night he hides in his well-stocked home, holding off the attacking hordes, as he searches for a cure. It’s the holing up, of course, that kept coming to my mind a few weeks into Washington state’s shelter-in-place order for the Covid-19 pandemic (if I read that sentence six months ago I would’ve thought it was a reference to some sci-fi movie). I’ve mostly been looking for escapist entertainment – I’m definitely not planning on watching CONTAGION again, as seems to be popular – but I’m doing okay with genre movies that have parallels to the situation. So I watched THE OMEGA MAN again. END_OF_DOCUMENT_TOKEN_TO_BE_REPLACED Harry Belafonte plays Ralph Burton, an inspector who gets trapped alone in a collapsed mine. He’s down there a long time and goes stir crazy talking and singing to a radio that never talks back (he assumes it’s broken). Eventually he gives up on anyone rescuing him but is luckily able to dig his own way out of the rubble. (Shoulda tried that before, I guess.) END_OF_DOCUMENT_TOKEN_TO_BE_REPLACED