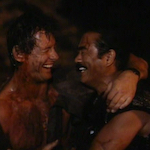 Another thing about IMMORTAL COMBAT [sic] is that it stars both Roddy Piper and Sonny Chiba. And the villain is Piper’s THEY LIVE co-star Meg Foster as Quinn, who rules the island with her husband Stan (Roger Cudney, TOY SOLDIERS, BARBARIAN QUEEN II) and is behind some scheme with a chemical company called HybriCo to kill fighters and turn them into brainwashed, uh, ninjas or something. I didn’t totally follow it but these companies are always up to complicated shit. What else is new? END_OF_DOCUMENT_TOKEN_TO_BE_REPLACED