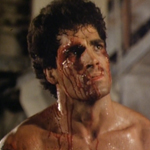 Now in LOS ANGELES, CALIFORNIA some beat cops stumble across a night time warehouse arms deal and it turns into a big shootout. It took me almost 10 minutes into the movie to figure which one was gonna be the main character (because nobody seems like an obvious blackbelt) but it’s a cop with the enviable name Brad Spyder (“Blake Bahner – W.K.F. World Kickboxing Champion”) who chases one of the escaping criminals to the top of a building and has a long fight with him, but is horrified when he accidentally kicks him off the roof. He yells “NO!” and catches his hand, but then drops him. The guy’s dad is mad so he shoots Spyder’s partner Lee Stokes (Ronald William Lawrence. END_OF_DOCUMENT_TOKEN_TO_BE_REPLACED