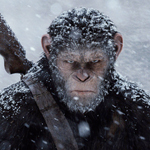 It’s almost beside the point that somehow Reeves films a bunch of dudes in weird suits out in the woods and Weta turns them into photo-realistic animated characters. Most of the main characters and extras are computer generated, but I just think of it as live action while I’m watching it. Remember when it seemed like the Achilles heel of motion capture would always be the creepy, doll-like eyes? Well, here we have Caesar (played by the Marlon Brando of mo-cap, Andy Serkis), a performance that’s at least 25% intense stare-down. It’s as if all the soul and humanity missing from all the eyeballs in THE POLAR EXPRESS were set aside to load into his. END_OF_DOCUMENT_TOKEN_TO_BE_REPLACED