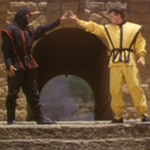 The dilemma: American servicemen abducted overseas again. Ninja related again. This time it’s worse, because the crazy British Colonel Mulgrew (James Booth, writer of part 2 and AVENGING FORCE and this one) and terrorist Sheik Maksood (Ron Smezarack) plan to burn the four captured Delta Force commandos at the stake and nuke New York City with a suitcase bomb if they aren’t paid $50 million. (It seems like either threat would be enough though, right?) I know that sounds like a boring useless couple of loser villains with nothing to contribute, so fortunately they are also training an army of super ninjas, one of whom wears a silver helmet and mirror eye patch. So they check out. END_OF_DOCUMENT_TOKEN_TO_BE_REPLACED