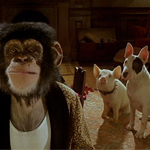 Maybe not, it turns out. Esme Hoggett (Magda Szubanski, who was only 37 at the time! Holy shit!) and “the wee pig” get stranded in a major city. They don’t say which one, but it’s whichever city that is where the skyline includes the Hollywood sign, the Sydney Opera House, the Golden Gate Bridge and the Eiffel Tower, among others. (No Space Needle, I’m afraid.) Garish billboards hang above picturesque canals and cobblestone roads. Most of the hotels don’t accept pigs, but they find one secretly housing a bunch of dogs, cats, chimps and an orangutan. END_OF_DOCUMENT_TOKEN_TO_BE_REPLACED