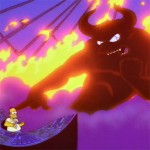 The Hughes brothers are identical twin brothers who look the same. Because they are identical twins. Other than that, they seem very down to earth. They got alot of attention very fast with the huge success of their first picture, MENACE II SOCIETY which basically started the whole “young black director makes first low budget movie about life in the hood” thing back in the ’90s. They followed that up with the underrated heist/Vietnam movie DEAD PRESIDENTS, which got bad reviews and which they disavow on every subsequent dvd release. END_OF_DOCUMENT_TOKEN_TO_BE_REPLACED