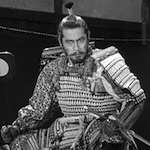 Two generals, Washizu Taketoki (Toshiro Mifune, HELL IN THE PACIFIC) and Miki Yoshiteru (Akira Kubo, GAMERA: GUARDIAN OF THE UNIVERSE), are headed back to their boss Lord Tsuzuki (Hiroshi Tachikawa, FIGHTING ELEGY) at Spider Web Castle after a glorious victory in battle. But, like a horror movie, the woods seem to have changed, and they’ve gotten lost. Then they spot a strange all white ghosty type person (Chieko Naniwa, SANSHO THE BAILIFF) just kinda sitting there in the woods glowing. And when that happens, I mean you basically got a choice of running away or walking up to it and seeing what the deal is. They choose B. END_OF_DOCUMENT_TOKEN_TO_BE_REPLACED