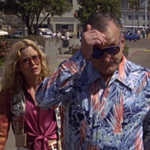 Jake is the more laid back grownup who laughs and says “Give the kids a break, it’s Christmas!” END_OF_DOCUMENT_TOKEN_TO_BE_REPLACED