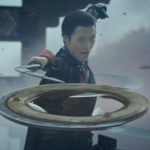 In the opening we see the Guillotines (or really the team of digital FX artists) demonstrate their skills in Zack Snyderian slo-mo detail. They have ornate metal rings (like that thing Xena threw) that spin on the end of a curved sword that they hold like a jai alai basket. They pose and let it menacingly chunk chunk chunk until they toss it. It can curve around, ricochet and ring around some motherfucker’s collar and then the machinery dramatically clicks and chings for a while before the blades fold and pop out and cut off the head. END_OF_DOCUMENT_TOKEN_TO_BE_REPLACED