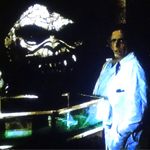 First and most important order of business is to assure you that the title and cover art are not misleading. Though it was made during the height of slasher sequels and shows a strong A NIGHTMARE ON ELM STREET influence, it is indeed a movie about, as the hero calls it, “that brain monster thing that’s killing everyone.” And they show it right at the beginning – a big slimy pulsating brain with a tentacle/spine hanging out like a tail, hooked up to some machines in a lab at the Psychological Research Institute (PRI). I think it was wise to establish that we’re dealing with arguably a goofy ’50s drive-in movie throwback before the first big scare sequence and not after. Pull that Band-Aid right off. END_OF_DOCUMENT_TOKEN_TO_BE_REPLACED