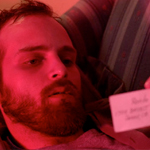 The plot concerns Paul (Luke Sorge), a combat veteran living with his protective younger sister Jill (Brenna Otts) after being dishonorably discharged for what we’re told was an “of course, mysterious” shooting incident. Jill tells him he can’t have alcohol or guns in the house, but he’s such a mess she ends up cradling him and pouring whiskey in his mouth like she’s bottle-feeding a baby. She sends him to an addiction doctor someone recommended to her, but doesn’t realize he’s going to talk to a weirdo who will give him a big monologue about the local fetish community and then “prescribe” for him to show up at an apartment in a highrise downtown to fuck some rich creep’s wife in front of him. END_OF_DOCUMENT_TOKEN_TO_BE_REPLACED