I realized last night that Halloween is a week away and I still feel like I’m just getting started on the seasonal festivities. Maybe October will have to be held over. Anyway, I hope you enjoyed the OUIJA: ORIGIN OF EVIL review today, and over on Patreon I have a new post taking a look at a Knight Rider episode called “Halloween Knight.” There are some goofy Scooby-Doo elements, Halloween costumes and a bunch of references/homages/connections to horror movies, including the very obvious one pictured below and a slightly more obscure, much more surprising one that I’m excited to share with everybody. 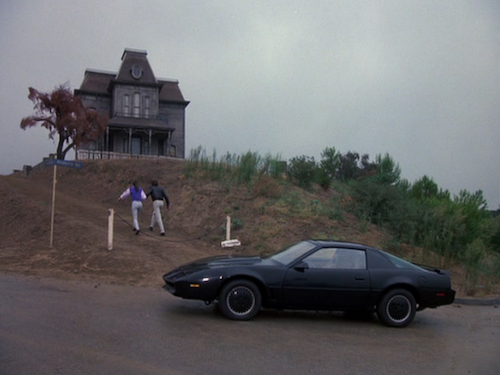 Thanks everybody, and there’s plenty more to come right here on outlaw vern dot com. 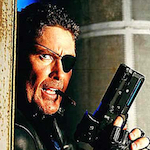 Not too long ago it was in the nerd-news that Samuel L. Jackson had signed on to play the character “Nick Fury” in as many as nine Marvel Comics movies. Some people said, “Well, that’s not surprising. Samuel L. Jackson will sign onto anything!” But that’s not really fair, they were probaly just actors who were bitter because they didn’t get the roles in THE SPIRIT, CLEANER, RULES OF ENGAGEMENT, S.W.A.T., SOUL MEN, JUMPER, HOME OF THE BRAVE, FREEDOMLAND, FARCE OF THE PENGUINS, BASIC, CHANGING LANES, SPHERE, LOADED WEAPON 1, etc.

Where does this Nick Fury come from? Probaly some comic book, but in my opinion mainly from this TV movie starring David Hasselhoff. I actually have wanted to see this for years because it was written by David Goyer in the same year he did BLADE, but they rarely showed it on TV. One time I happened to catch part of it on cable so I checked to see when it would air again – never, it turned out. That was the one and only scheduled airing. But that was before Fury Fever swept the nation, so now it’s on DVD. END_OF_DOCUMENT_TOKEN_TO_BE_REPLACED