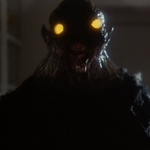 If you never saw it either I’ll tell you what I have learned. It’s about a rash of disappearances among “undergrounders,” the homeless who find shelter in the underground tunnels of New York City, like in that documentary DARK DAYS. (This would be cooler if it had a DJ Shadow score, but the one it has by David A. Hughes is pretty good.) The authorities don’t really care until it starts happening to people who live at surface level in a higher class. There’s a nicely shot title sequence with a cool keyboard theme playing as a monster arm reaches out of a steaming manhole to snatch a woman out walking her little dog. It’s a powerfully simple opening that really sets the scene for a fun, energetic movie that doesn’t quite materialize. END_OF_DOCUMENT_TOKEN_TO_BE_REPLACED