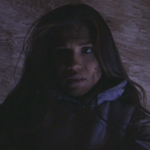 And there’s another mystery. Her brother Nathaniel (Gerald Tokala Clifford, SKINS, SWELTER) has been missing for some time, possibly dead, after an incident with her father discovering him using meth. And though her father is catatonic most of the time, she hears him yell out things in the night, and got him to draw some pictures which seem to have some sort of significance. So this may be related to one or more of the mysteries. END_OF_DOCUMENT_TOKEN_TO_BE_REPLACED