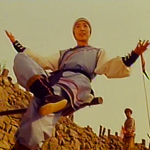 In WING CHUN, the 1994 Yuen Woo-Ping classic, the great Michelle Yeoh plays Yim Wing Chun, a legendary character who was supposedly the first disciple of the Shaolin nun who invented the Wing Chun style of kung fu after seeing a crane fight a snake. The movie’s not about that, but it’s a reworking of a famous story about Wing Chun using her skills to ward off an asshole trying to force her to marry him. I’m not sure, but I think it’s kind of like in western culture if you do a new version of Zorro, Dracula, Hansel and Gretel or whatever you’re probly not gonna directly adapt the version people know, you’re gonna try to take the famous elements and put a different spin or twist or perspective on them. END_OF_DOCUMENT_TOKEN_TO_BE_REPLACED