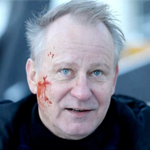 IN ORDER OF DISAPPEARANCE (Kraftidioten) is another great movie I was pushed into watching by an impending remake. In this case the remake is the Liam Neeson movie COLD PURSUIT. The same director, Hans Petter Moland, first did the story in Norway in 2014 with Stellan Skarsgard (DEEP BLUE SEA) as Nels Dickman, the stoic small town snow plow driver who up and dedicates his life to violent revenge after a drug gang kills his son (Aron Eskeland). There’s a darkly comic tone as he questions and kills his way up the ladder, rarely having much to say to them, then easily disposing of the bodies in the snow. Each time someone dies in the movie their name is written on the screen in memoriam. At first it kinda seems like chapter titles, but as shit escalates these cards become comically frequent and even cut to as shorthand for “and then they killed him.” END_OF_DOCUMENT_TOKEN_TO_BE_REPLACED