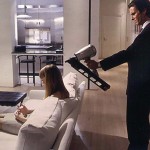 This is a slasher movie about girls at a slumber party, and a dude with a portable drill. There is no pillow fights or nothing but otherwise it pretty much plays out how you would imagine.

Almost anywhere you read about this movie they say it’s a feminist slasher movie. I can see a touch here or there that supports that theory, but I am positive that pretty much every one of these people would be saying it was misogynistic if it was directed by a man. In most respects it’s exactly like every other slasher movie of the time, including showing lots of gratuitous female (and not male) nudity. When the girl gets up in the morning you see her take her shirt off to change into a dress. When she goes to school you see lots of nudity in the locker room, including a really funny shot (I’m not sure if it’s intentionally funny or not) that pans down and just focuses on a girl’s ass for a while before panning back up to where it started. Then during the slumber party they all take their clothes off to change into their night clothes and for the most part don’t wear pants for the rest of the movie. The other characters, who don’t get naked, wear those tight running shorts that were popular at the time. END_OF_DOCUMENT_TOKEN_TO_BE_REPLACED