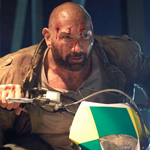 Bautista plays American ex-Marine Michael Knox, who comes to London to bring his teenage “niece” – actually the daughter of a war buddy whose death he blames himself for – to the soccer match. (Yes, he keeps not calling it football, but don’t worry, there’s a part where a guy gets punched out for that very offense.) Unfortunately Uncle Mike and Danni (Lara Peake, HOW TO TALK TO GIRLS AT PARTIES)’s outing coincides with a plot by separatists from the ex-Soviet nation of Sukovia (on the eastern border of Sokovia, I believe) trying to find a former rebel leader in hiding and then blow up the stadium. END_OF_DOCUMENT_TOKEN_TO_BE_REPLACED