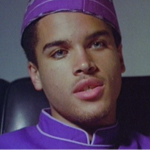 It definitely falls into the outsider art type category. The awkward home-made filmatism combines with some truly strange ideas to create a surreal experience, a movie that transcends competence. The climax really doesn’t work as action or drama, but it’s so weird I forgave it. The shootouts are always confusing but enthusiastic. There are guns that blow soccer ball sized holes in the sides of cars, and send victims flying through the air looking suspiciously like dummies being sloppily tossed from off screen. END_OF_DOCUMENT_TOKEN_TO_BE_REPLACED