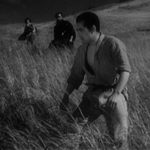 They surprise Yano on the dock and one by one they run at him and get tossed into the water. This being a night scene in black and white it’s really striking and sometimes looks like he’s tossing them into a black void. Once he’s gotten Momma into an armlock and made him beg to be killed to hide his shame of being defeated by a scoundrel, Sanshiro is like “You know what, maybe this Yano would have a better curriculum” and next thing you know he’s pulling the guy’s rickshaw back to his school.
END_OF_DOCUMENT_TOKEN_TO_BE_REPLACED