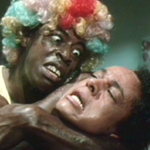 The score is by Jack Wheaton, additional music by Marvin Gaye’s guitarist and musical director Gordon Banks. I tend to think that outside of the electro stuff like Zapp and “Atomic Dog,” funk no longer existed in the ’80s. Tell that to these opening credits, though: END_OF_DOCUMENT_TOKEN_TO_BE_REPLACED