END_OF_DOCUMENT_TOKEN_TO_BE_REPLACED

My friends, I write this review with a heavy heart. I know you’ve been waiting patiently for me to review THE EXPENDABLES, but first I had to process it, and what it has done to us. Sometimes a man must go on a journey to find himself before he can rise in the morning and face others. Ever since I was a young END_OF_DOCUMENT_TOKEN_TO_BE_REPLACED

Also there is arm wrestling. END_OF_DOCUMENT_TOKEN_TO_BE_REPLACED

So now I’ve seen it and I know TANGO & CASH is a fun but not all that great 1989 action movie that personifies (moviefies?) the excess of the ’80s, and not just because it has a monster truck in it. END_OF_DOCUMENT_TOKEN_TO_BE_REPLACED

Suddenly they get to a marsh. The guy’s shoe sticks in the mud. He laughs. “You know, when I saw you I wasn’t scared, but I did wonder why you were wearing those. Now I know.” END_OF_DOCUMENT_TOKEN_TO_BE_REPLACED

Vern has read Stallone’s The Expendables

Usually I don’t write much about a movie before it’s made, because I prefer movies that exist. Every once in a while somebody sends me a script like LIVE FREE OR DIE HARD or RAMBO, but I usually ignore them. I would rather watch the finished movie and not know what the original plan was. And to be honest I’m not sure how qualified I am to tell you about the meal based on the recipe. But THE EXPENDABLES – a Sylvester Stallone action ensemble picture where he will write, direct and then star alongside Jet Li, Jason Statham, Dolph Lundgren, Forest Whitaker and Randy Couture – is a big fuckin deal among those of us who love the action cinema of the ’80s and ’90s. We can’t help but dream about this one like nerds once dreamed of Star Wars prequels or new outfits for their limited edition Serenity dolls so they can act out what would’ve happened in the second season. So when Stallone’s script fell into my lap this time I couldn’t resist.

By the way I would like to take a moment to welcome A.B. King to the talkback. Welcome, A.B.

The ragtag team of the title are a group of elite mercenary badasses – at one point described as “totally prepared to die in a blaze of glory” – hired to take out a dictator in the South American country of Corza. I do not have an opinion on what’s going on in Corza because I believe it is a fictional country, but if in fact they’re real I’m against them. They got all kinds of human rights violations and shit. No good. END_OF_DOCUMENT_TOKEN_TO_BE_REPLACED 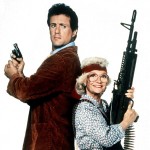 Poor John Rambo. Drafted into ‘Nam, transformed into a killing machine, trained to eat things that would make a billygoat puke. He came home, butted heads with an asshole sherriff, fought a bunch of cops, got a pardon so he could rescue some POWs and “win this time,” lived at a monastery I believe, real good stickfighter, made some allegiances in Afghanistan that in retrospect were not so hot but you know what they say about hindsight. Now he lives in a shack in Thailand where he catches deadly snakes for a living. His first line in the movie is telling a guy to go fuck himself. He’s real cynical about the state of the world and the inevitability of bloodshed, but some Christian missionaries convince him against his better judgment to take them in his boat and drop them off in a war zone in Burma. You guys run along now, don’t get raped or blown up. Then when they don’t come back on time he has to go back and drop off the team of mercenaries the church hires to rescue them. I wish the team had a cool name like The Holy Rollers and had pictures of Jesus, Joseph and Mary airbrushed on their weapons, but no, they’re just regular guns for hire, they don’t give a shit about that stuff. They don’t even care about the money that much, so they’re gonna turn around when things look bad. But Rambo (to them “the boatman”) changes their minds. Using a bow and arrow. END_OF_DOCUMENT_TOKEN_TO_BE_REPLACED

Cobretti struts in wearing sunglasses and chewing on a matchstick. You’d think he’d want to have the full power of vision at his disposal in a situation like this, but he chooses fashion instead – not a great character trait for a human being, but acceptable for an action movie hero. If you want to get picky Dirty Harry probaly should’ve put down his hot dog to foil that bank robbery, but he didn’t, and we admire him for that. END_OF_DOCUMENT_TOKEN_TO_BE_REPLACED

Of course, I’m coming late to the party. I missed this one when it came out in 1993 but I was planning on seeing it, so I saw it this week in 2007. So the rest of the world has had 14 years to know what I’m about to tell you: some guys robbing money from a treasury plane drop the money in the mountains, call a rescue team to try to steal their helicopter, and wind up having to deal with ace mountain climber Sylvester Stallone. END_OF_DOCUMENT_TOKEN_TO_BE_REPLACED

Now by that I do not mean that Entertainment Weekly shit that he is not making hits. There are many actors who are not making hits who are still completely respectable, such as our friend Mr. Eastwood. But Stallone is in the Arnold category, he’s done so much worse than making less money. His good days are so far behind him you almost don’t even associate him with them. First he turned Rambo into an icon and became the symbol of everything that is wrong with our country, our culture, our movies, and our clothes. (I mean that headband looked fuckin ridiculous.) Then he started makin shit like COBRA and DEMOLITION MAN and etc. etc. He fell so hard that even HE started noticing it after a while. So he went through a stage where he was fighting for critical respectability. He tried to go the Travolta route and lobbied for the role of Max Cherry in JACKIE BROWN. When that didn’t pan out he got fat for the role in COPLAND and america was under his spell until, you know, the movie came out. Soon he became so desperate he tried to revive both the Rocky and Rambo series, but luckily that hasn’t worked out yet. END_OF_DOCUMENT_TOKEN_TO_BE_REPLACED