I could re-post paraphrases of every news story that comes along, but I don’t got time for that shit so instead I give you the most important shit condensed into one post.

Today we got plenty of current headlines to discuss involving JCVD, Scott Adkins, Arnold Schwarzenegger, Kim Je-woon, John Hyams, Parker, others, plus a special treat for you comics con attenders.

END_OF_DOCUMENT_TOKEN_TO_BE_REPLACED

One thing we’ve learned from the movies is that cops often come from faraway lands to follow a fugitive or transfer prisoners back to their jurisdictions, and when they do that they have to team with a screw-up from the local department and at first they hate each other and say ignorant things but over time the screw-up will learn from working with the foreigner and the foreigner will see something in the screw-up that no one else did and they will gain respect for each other and at the end they will be great friends to set up for the sequel that most likely will never come. Pat Morita came from Japan and did it in COLLISION COURSE, Jackie Chan came from Hong Kong and did it in RUSH HOUR, Clint Eastwood came from Arizona and sort of did it in COOGAN’S BLUFF, except he didn’t need the partner because he’s motherfuckin Clint. Well, here we got Schwarzenegger coming from Russia to Chicago to get the Georgian gangster who killed his partner and is bringing “the American poison” into their country. James Belushi has to escort him and Walter Hill has to escort the movie. END_OF_DOCUMENT_TOKEN_TO_BE_REPLACED 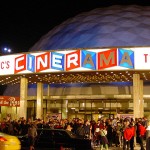 This year some of the films shown include LAWRENCE OF ARABIA, HOW THE WEST WAS WON (in 3-strip Cinerama), THIS IS CINERAMA, OKLAHOMA and IT’S A MAD, MAD, MAD, MAD WORLD. I forgot to go to those but I saw GHOSTBUSTERS, TOTAL RECALL and KRULL instead. All in 70mm. END_OF_DOCUMENT_TOKEN_TO_BE_REPLACED