I mean seriously, how did this happen? END_OF_DOCUMENT_TOKEN_TO_BE_REPLACED

I know there are a contingent of you out there who are as excited for this one as I was. It’s the most anticipated DTV movie of the year besides the Scott Adkins/Isaac Florentine joint NINJA. So it kills me to say this but I don’t think COMMAND PERFORMANCE is one of Dolph’s better efforts. END_OF_DOCUMENT_TOKEN_TO_BE_REPLACED

MEN OF WAR is a Dolph Lundgren mercenaries-on-a-mission movie. In the surprisingly atmospheric opening Lundgren’s ex-Special Forces character Gunar is hanging out on the streets of Chicago, wearing a hat he could wear if the movie was set during the Depression, his breath showing in the cold air. Some tough guy rudely tells him to talk to somebody, gesturing to a limo. “In the back seat?” Gunar asks and when the answer is yes he bashes the guy’s head through the backseat window and leans in to talk to the passenger. So you don’t have to wait too long for the movie’s declaration of badass intent. END_OF_DOCUMENT_TOKEN_TO_BE_REPLACED 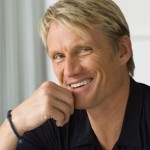 What did happen to all those MIAs in Vietnam? FIRST BLOOD II said some were still alive, being tortured by sadistic Viet Cong who’ve yet to move on with their lives. UNIVERSAL SOLDIER posits that they were killed in action and their bodies were experimented on by Jerry Orbach, who resuscitated them as mindless super soldiers with super-healing powers when kept at low temperatures. END_OF_DOCUMENT_TOKEN_TO_BE_REPLACED

(I looked it up, and Armstrong actually hasn’t worked on the Daniel Craig ones, but he was stunt coordinator and/or 2nd unit director for DIE ANOTHER DAY, THE WORLD IS NOT ENOUGH, TOMORROW NEVER DIES and NEVER SAY NEVER AGAIN and stunt double for 3 other Bond movies.) END_OF_DOCUMENT_TOKEN_TO_BE_REPLACED 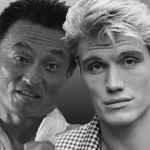 Basically this one is a cop buddy picture with Dolph as the line-crossing, bushido practicing white cop on the Little Tokyo beat who by the way is out to avenge the deaths of his parents by a samurai, but that’s neither here nor there. We know Dolph is a bad motherfucker right away because he single-handedly busts up an illegal underground fighting circuit by rappelling in from the ceiling in the middle of a match and then taking on those who disagree with his decision. Later he’s in a cafe when he happens to see some of the same Yakuzas bullying the old lady owner for protection money. In the middle of the brawl that ensues he’s introduced to his new partner, Brandon Lee. END_OF_DOCUMENT_TOKEN_TO_BE_REPLACED

Vern’s DTV Triple Header: LUNDGREN vs. SNIPES/STATHAM vs. SOME DUDE FROM TV I NEVER HEARD OF!!! 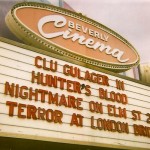 I try to watch alot of DTV movies, but I don’t always succeed. Most of you have probaly never watched them, and you may assume that they are very good and enjoyable, and capable of adding meaning to one’s life. However, this is almost never the case. In the world of DTV filmmaking it seems pretty clear that nobody gives a shit. Most of them are trying to just reach 90 minutes and throw the shit on a shelf. You could argue that more effort goes into pornography, since some poor girl has to take it in the ass. That’s elbow grease.

So this is an unusual couple of days because I’ve managed to watch a bunch of DTVs and all of them were actually okay. So okay, in fact, that I was able to watch them in two or less sittings. In this world that’s almost a miracle. Either that or I have somehow increased my attention span overnight. END_OF_DOCUMENT_TOKEN_TO_BE_REPLACED

Craig R. Baxley’s second directorial work (after ACTION JACKSON, before STONE COLD) is probaly his weirdest. It’s kind of like the cop movie version of BROTHER FROM ANOTHER PLANET. Dolph Lundgren plays a plays-by-his-own-rules cop whose partner dies in a drug sting that happens to also be interrupted by an alien invader with a trenchcoat and glowing eyes. This guy, I don’t know what his name is but he’s not a lovable E.T. type alien, he’s just a tall scary dude who goes around and says “I come in peace” but then shoots a weird tube out of his palm into your head and sucks out your endorphins. I could’ve sworn he stole the heroin from the drug dealers, but the reason he’s on earth really is not to steal heroin, it’s just to farm people for endorphins. We learn later from an outer space cop who’s chasing this guy that endorphins are a valuable drug on whatever planet they’re from, I guess we’ll call it Planet Icomeinpeace. He must be stopped because if he goes back to Icomeinpeace and gets alot of alien space dollars for his endorphins (or “dorph” as I bet they call it on the space streets) then other aliens are gonna figure out how easy it is to cop dorph out of our heads and it’ll be over for the human race. END_OF_DOCUMENT_TOKEN_TO_BE_REPLACED

Well today I saw Dolph’s version and I’m here to report that it’s okay. I liked Thomas’s version the best but this one definitely has its moments. Like the 2004 one, this is definitely more in the action movie/vigilante style than some kind of Batman or Superman deal. The main comic book element is that Punisher lives in the sewers and has tunnels to bring him everywhere. Also he has a wacky sidekick who is some kind of homeless guy who always claims to be a theater actor, and who always rhymes. END_OF_DOCUMENT_TOKEN_TO_BE_REPLACED

One thing Dolph already blew before you even watch this one is that generic title. I don’t think this is based on the old video game Defender, so there’s no excuse. It sounds like the american title for a Jet Li movie, and probaly is. On the positive side, he actually is a defender in this movie. He defends stuff. Specifically, he is the head of security for the presidential security adviser. So he’s defending her. END_OF_DOCUMENT_TOKEN_TO_BE_REPLACED