My man Clint’s new directorial work HEREAFTER hit the home video this week, and it’s some creepy timing. The movie opens with vacationing TV reporter Cecile de France (from HIGH TENSION and MESRINE but once again I didn’t recognize her) leaving a Thai beach hotel one beautiful morning to shop for souvenirs in an open air market. Something about the filmatism here reminds me of JAWS, it’s just that heightened sense of sight and sound, you can hear voices and tones from every direction and almost feel the warm breeze on your neck. It’s so beautiful and peaceful but you know something horrifying is rumbling in the distance. END_OF_DOCUMENT_TOKEN_TO_BE_REPLACED

I always try to stay up to date on my favorite action movie guys. I accept them as human beings who age and deteriorate like all of us do (not including Prince), and I am very interested in their later works. But alot of people don’t, they turn on their stars if the oxygen ever hits their skin or if their metabolism betrays their bellies. That Australian beer commercial with Steven Seagal that came out recently, I saw comments on other sights it was posted and everybody fixated on his weight, obviously not having seen any of the 26 movies or two seasons of reality TV he’s done in the past 10 years. Same thing with Stallone, every time he comes out with a new one people start gagging about him being old, like it’s the most appalling thing they’ve ever seen. This is just the people reinforcing Hollywood’s obsession with young pretty people, but look at Clint. He’s older, greyer, more withered and hoarse than either of those guys, and I don’t think I’ve heard anybody feelin lucky enough to make fun of him for it.
END_OF_DOCUMENT_TOKEN_TO_BE_REPLACED

PAINT YOUR WAGON was next on my Clint Eastwood list. Holy shit, you’re telling me Clint and Lee Marvin did a western together? How did I never see this one before?

The music on the credits is pretty corny, but I forgive it. Right off the bat you got Lee as a drunk old hustler in a top hat, he meets young Clint and declares him his partner. This is good shit.

Wait, what is Clint doing with that guitar? Hold on, is he crooning? Wait a– is this–

Holy shit, this is a musical! END_OF_DOCUMENT_TOKEN_TO_BE_REPLACED

But you know what, it only adds to Clint’s mystique that he so humbly shares the movie with this rookie and even allows the spotlight to shift over to him for a while while the old man is tied up in a warehouse getting raped by Sonia Braga (SPOILER). This is also the most DIRTY HARRY of Clint’s non-DIRTY HARRY pictures. In fact, it probly feels a little more DIRTY HARRY than SUDDEN IMPACT, the one actual DIRTY HARRY that he directed. END_OF_DOCUMENT_TOKEN_TO_BE_REPLACED

This websight called Letters of Note recently posted a letter they got ahold of from 24-year-old Clint Eastwood to Billy Wilder. Eastwood was trying to get the role of Charles Lindbergh in THE SPIRIT OF ST. LOUIS and wanted to let him know that he wasn’t happy with the quality of his screen test. It’s cool because it’s so polite and modest and also shows a young man striving for the excellence that we always see him achieve seemingly so effortlessly. This was 1954, before he’d done anything, including that lab coat wearing bit part in REVENGE OF THE CREATURE. 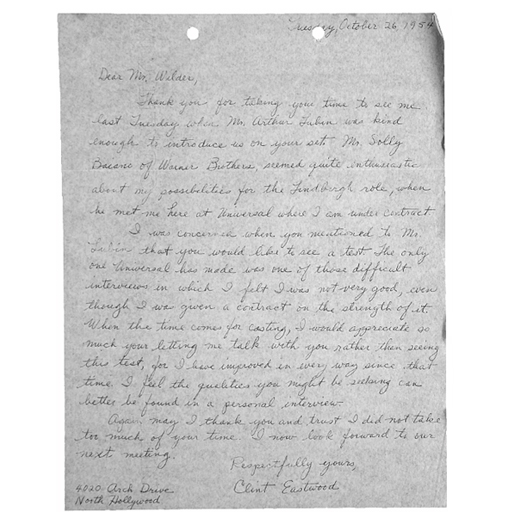 This pre-DIRTY HARRY teamup between Clint Eastwood and Don Siegel starts with Clint as sheriff’s deputy Coogan tracking a Navajo wife-murderer through the desert. The wide angle, the windy quiet and the cowboy hat tell you it’s a western, except Coogan rides in in a Jeep. He has a shootout with the suspect, captures him and then goes to visit an old girlfriend, leaving the man chained up on the porch like a dog. His boss storms in to chew him out while his girl is bathing him – Coogan asks the sheriff to pass him the soap. END_OF_DOCUMENT_TOKEN_TO_BE_REPLACED

HANG ‘EM HIGH opens with Clint by himself moving some cattle across the plains. Soon he runs into some deputies who question him and don’t believe anything he says. You know how cops can be. He got pulled over for cattledriving-while-Clint.  What we don’t know yet is that the cattle really are stolen property. The guy he bought them from was not who he said he was. The real owner was murdered, and that’s why the lawmen are hassling Clint. END_OF_DOCUMENT_TOKEN_TO_BE_REPLACED

The mistrust goes both ways. Mandela’s head of security (Tony Kgoroge) knows this is gonna be a tough job, but when he asks for more men Mandela gives him a bunch of white South African cops, the enemy of the African National Congress. He has every reason to believe these scary motherfuckers could plan an assassination themselves, but Mandela wants them for their symbolic value. If he goes around with an integrated security team then that says something. What else can he do, really? Somebody’s gotta put their toes in the water. END_OF_DOCUMENT_TOKEN_TO_BE_REPLACED 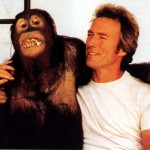 But by the end I realized that this letting-bygones-remain-in-their-original-state-of-being-bygones business is the central theme of the movie and the reason why it’s so enjoyable. It’s about friendship and bonding and forgiveness, about enemies becoming buddies. When mustache-sporting tough guy William Smith shows up in town and goes jogging with Philo you know right away that he’s gotta be the big mafia-sponsored underground fighting opponent Wilson coming to spy on Philo. That’s easy to predict. What’s not as expected is that they instantly like each other, and it stays that way. They help each other out and there’s alot of talk of owing one and being even, but it seems to me that’s all a front. There’s just no animosity between them, nothing but professional respect and a shared disgust for the people they’re working for. I didn’t pick up on that at first. I thought Philo would outsmart Wilson and show him up. Maybe he could if he wanted to, but he respects him too much. When they finally do have their fight you’re not rooting for one side like you traditionally do in a fight movie. They’re not fighting for any kind of grudge or to prove anything, but just out of love for their sport of bareknuckle boxing. END_OF_DOCUMENT_TOKEN_TO_BE_REPLACED 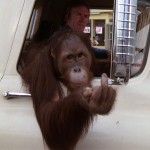 Well when and if this happens to you you might get fed up and try to chase those fuckers down, possibly steal a street sweeper and tail them until they hop a train, at which point you will at least get to steal their bikes. This is a worthwhile option and one that works out for trucker/mechanic/bareknuckle brawler Philo Beddoe in this movie, but it also begins a war that leads to many fights and the destruction of more than a dozen motorcycles. So just know what you’re getting into here is all I’m saying. END_OF_DOCUMENT_TOKEN_TO_BE_REPLACED